Charlottesville – For Such A Time As This

Charlottesville – For Such A Time As This

Recently we were in Charlottesville, Virginia meeting with various leaders – church leaders – lawyers – medical doctors, and many who are involved in key areas of leadership in that historic part of the United States. As you will see on the picture below, our main seminar while there was entitled – Charlottesville – For Such A Time As This.

On one occasion we were able to visit Monticello – the home of Thomas Jefferson the third President of the nation – a spokesman for democracy, an American Founding Father, and the principal author of the Declaration of Independence (1776).

We were actually walking inside a page of American history – and even went inside the domed area of Monticello, which is seen so visibly on the reverse side of the 5 cent U.S. Nickel. Quite the experience to be holding up a nickel inside the very place depicted on the nickel! 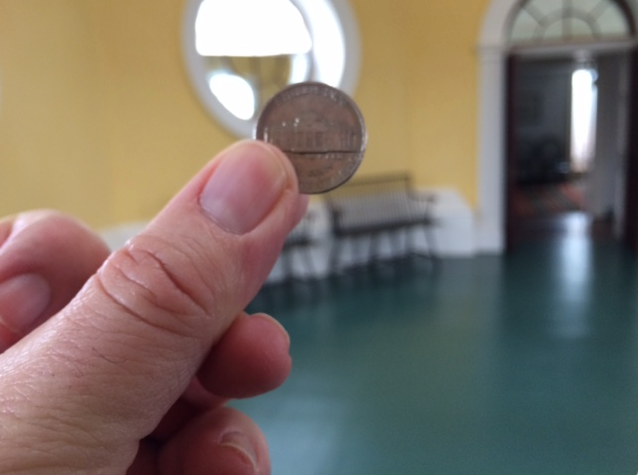 There we were – walking in a page of history – and holding up a piece of that history in our hands! We have also included a further picture below of our standing on the lawn of Monticello – still holding up that nickel! 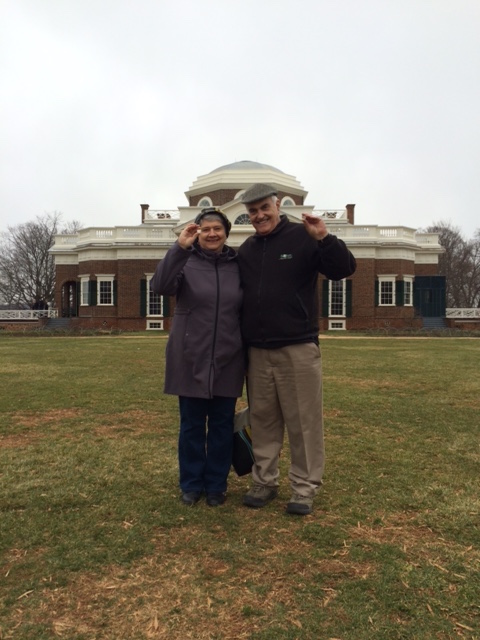 It was a privilege to be with the people of Charlottesville and to learn and experience something of the depth of American history in that area of the nation, and of its on-going influence and significance in American life today. During our time in that part of Virginia – we gleaned much concerning three early Presidents – Thomas Jefferson – James Madison – and James Munroe and how their influence clearly shaped a significant part of U.S. History. Each of these men had a vision – perhaps imperfect – but they did have a vision of what they felt life could be and should be like and worked towards that end.

In this day and age of instant communication, we forget that we also are living out prophetic Biblical history that others before us could only have envisioned with a limited perspective. The recent horror from the acts of terrorism in Brussels and the on-going news updates from Iraq and Syria give us graphic details of life today that we could only have imagined a few years ago. We are living in a dramatic time of Biblical History – which is why we need to be far more informed than ever concerning what is going on within the global arena – especially “why”, and “how” we must pray. God actually uses our informed prayers as an essential part of what He yet wants to do, in order to fulfill His purposes in our day and age – in spite of the seeming hopelessness that tries to oppress us (c.f. Daniel 7:25), telling us there is no hope.

God is at work – and He is asking us to view current global events through the lens of prophetic history. At one point during our time in Charlottesville, the seminar had concluded and people were invited to stay for prayer, if they so chose. We were amazed and thrilled to stay on for a further two hours while people from all walks of life came forward for prayer, wanting to be catalysts of change for the purposes of the Lord, each in their respective areas of life and work. Millions are coming to a saving knowledge of Christ as Saviour and Lord all across the Middle East these days, in spite of what news the media reports may suggest. Significant accounts of God at work in the Marketplace continue to affirm that the God of History is methodically proving His promises in Scripture are still being fulfilled in our present day – and that we are part of this. Indeed, part of our Charlottesville seminar was held in a Medical Doctor’s office – a living example of Marketplace Ministry.

While in Virginia – amidst the memories of so much history, we were reminded of Daniel 2:21-23 – that God alone changes times and seasons – and that He is the One that sets up kings and deposes them… And that He gives wisdom to the wise and knowledge to the discerning… We are part of His plan in a day and age such as this – but we need to be willing to ask for His wisdom and knowledge on an ever increasing basis to know how to be praying, and how to be those who are willing to pray-into-being things that are not, as though they were…(c.f. Romans 4:17).

Are you willing to join us in this type of prayer – for such a time as this?

Watch for our newsletter and further blog updates in the coming weeks. We will be in Calgary, Canada. Hungary, and then in Owensboro, Harrodsburg, and Manchester, Kentucky – followed by return trips for various ministry venues in England. Maybe we will see you at one of these upcoming venues, but most of all – keep praying…the God of all History is at work, methodically working out His plans and purposes in our very midst. You and I are central to these plans.

With love and blessings,